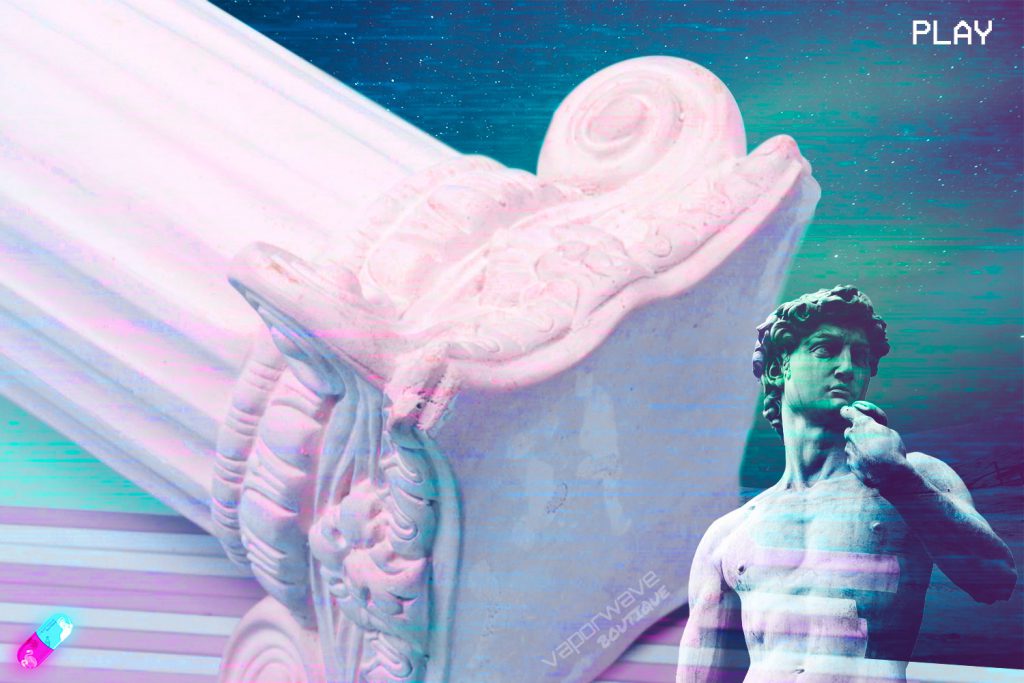 Let’s talk about vaporwave basics for you to have a quick understanding of this underground cultural movement. We have a more comprehensive article about it, you can check it out here!

From being an artistic and musical movement to an internet meme, vaporwave can be defined in different ways. It’s an aesthetic that managed to click with thousands of people and spread through social media breaking into the mainstream.

Conceptually, it is helplessly reminiscent. A melancholic and distorted look of the aesthetics of the 80’s and 90’s .

It is characterized by incorporating old images & web design from the early days of the internet, music videos or other elements of pop culture of decades past and mixes it with surreal and distorted elements.

(which birthed the subgenre, Simpsonwave.)

Vaporwave takes pieces of memories and collects & distorts them, adding visuals and sound effects that create a sense of deep melancholy, reminiscent of a past that never was. All this mixed with theories of aesthetic canons of ancient Greece, such as Roman busts or Renaissance paintings, Japanese commercialism of the 90s and a compulsive obsession with visual balance and the golden ratio.

Aesthetic is defined as, “a set of principles underlying the work of a particular artist or artistic movement.” It is a word frequently found within vaporwave culture, often stylized spread out with full width characters (ＡＥＳＴＨＥＴＩＣ.)

Many people refer to the particularly complicated style of vaporwave as “Aesthetic.” In this context, however, Aesthetic refers to a very particular style.

The YouTuber FrankJavcee brilliantly describes the aesthetics of the vaporwave:

Not enough with just the vaporwave basics?

If you are in for a deeper reading and further information check our article about What is vaporwave? There is more content about the vaporwave aesthetic and the influence in mainstream media.

Haircuts for Men - ダウンタンブルと死にます (Down tumble and die) - Album Review

5 Electronic "Vaporwave Style" Albums you need to listen to.

Synthwave Track, How to make one

Enter the lush, cyberpunk utopia and welcome the “Birth of a New Day”